After all the efforts to internationalize our cause it has become obvious that the Catalan struggle is not a minor claim from a few melancholic airheads who still believe in the long gone days. Even when it appears that the country’s sanity is in tatters due to the economic trembling that led to unpopular measures from the government, civil unrest, and an apparent situation of ongoing social confrontation, Catalans still fret about the unevenness of the legal contract that ties the nation to Spain. 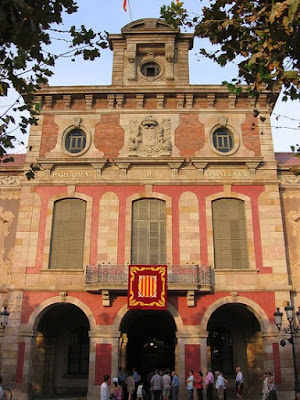 Too often it is referred as foes those elements within Spanish society who systematically attack any pretentions to establish a serious democracy in the country and allow the nations that make it up the right to self-determination. Nonetheless, it is generally acknowledged that no institution has done more to promote secessionism in Catalonia than the Zapatero administration over the last 7 years and his chain of deceits, being his sworn but false support to the new Catalan Statute of Autonomy in 2003 the most renowned one.
While Spain continues his crusade to guarantee its national integrity, which is a thoroughly reasonable positioning on their side, Catalans keep searching for the formula that will lead them to full sovereignty. Multiple associations, residual political parties, and fresh scissions from existing groups sell the idea of a free Catalan state atomizing the sector of the populace that favors independence. Rather than providing a multiple vanguard from which to pursue the long desired objective, the diaspora of political and social pressure is highly counterproductive and limits the impact of their claims to a very large extent.
Not only there is an evident failure on utilizing the disaffection towards Madrid the central government oppressive campaigns raise, but the lack of political unity is also a major cause of upholding the current statu quo. On related news, a recently released poll by the CEO, the Center for Opinion Studies, asked for the first time ever in an explicit manner if Catalans were in favor or against independence; the results were revealing: 43% would vote “yes’ to independence, 28% would vote “no”, and 23% would abstain from voting.
At this point, the only certainty is the imbalance existing between the two territories and the consequent need for readjustment. Ultimately, the first side that engages in proactive measures might attain a decisive edge; whether the Spanish will be able to respond to the peripheral claims for a larger self-government, or Catalan society will unite once in for all under the same political flag, could determine the final outcome of this conflict. For good or bad, the destiny of our nation is still in our hands.
__________________________________
Article publicat al Catalonia Direct.

In today's @LATimes I finally explain the story behind all those internet memes bearing my name. Feel free to share "My Life as a Meme." https://www.latimes.com/opinion/story/2020-04-05/meme-directed-by-robert-weide